Amazon Game Studios rolled out the first titles that feature deep integration with Twitch at TwitchCon in San Diego Thursday. Amazon bought Twitch in 2014. Geekwire.com reports that they dropped Breakaway, a sport brawling game, and Stream +, a wagering system. They also tipped New World and Crucible, a couple of other games built for Twitch broadcasters, viewers, and players.

He’s Baaaack! Teddy Ruxpin, which was a huge hit years ago for about 5 minutes…only to fill an entire mall store in San Mateo at fire sale prices later, gets a makeover. TechCrunch.com reports that the v 2.0 has somewhat creepy LCD eyes and iPad connectivity, and comes with 4 gigs of memory for stories he can read to kids. Ted 2.0 was rolled out at the Dallas Toy Show, and should be available in 2017. No word yet on pricing. 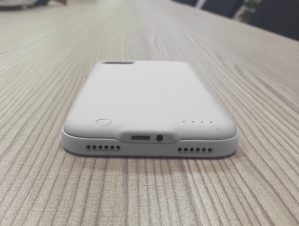 Although I haven’t really had an issue with it, many people are still plenty upset about the lack of a headphone jack on the iPhone 7 and Plus. Personally, I’ve used some 30 buck wireless Bluetooth ones, and tried out my quality wired ‘cans,’ and just used the dongle Lightening adapter. If you are one of those people who are feeling the pain, Fuze may have a solution coming in the next months. Thenextweb.com reports that Fuze is an indiegogo project that resembles a Mophie Juicepack battery pack case. The difference is…besides the Lightening jack at the bottom, there’s also a 3.5 mm audio jack. When it comes out, you can double your battery life, charge, and listen to your wired phones to your heart’s content. It will be $69 retail, but super early bird backers can get it for $49 if you head to indiegogo.com. Choose from white, Black, gold, rose gold, or blue.

Apple is set to freshen MacBook Pro models the end of October. The latest word, according to macrumors.com, is the they will have the previously touted OLED touch bar replacing the function keys at the top of the keyboard, a fingerprint scanner for security like the iPhones have, USB-C ports, and a thinner profile.

Amazon Angling to Take UPS & FedEx Business; Rumor- Apple May Jump Right to iPhone 8 Next Year; Blackberry-End of an Era

We reported earlier about how Amazon has been quietly building out its logistics network…leasing planes and a facility formerly used by DHL. Although Amazon publicly says it’s meant to complement existing delivery partners, like FedEx and UPS, the Wall St. Journal reports that Amazon has is looking to do much more. Eventually, Amazon plans to build a full-scale shipping and logistics network that will not only ship products ordered from Amazon, but will also ship products for other retailers and consumers. Businessinsder.com (which Amazon CEO Jeff Bezos has an interest in) says Amazon is looking to complete against FedEx and UPS. Internally, some Amazon execs call the plan “Consume the City.”

According to bgr.com, Apple may skip the 7S designation next year, and go right to 8 for what’s widely expected to be a radically redesigned iPhone handset. An Israeli Apple employee let the moniker slip in an interview with a reporter. He also said the 8 will have a better camera than the 7…no shock there…but also said cryptically that the phone will be ‘different.’

In what is unquestionably the end of an era, Blackberry will no longer make its own phones. Thenextweb.com says they will focus on software. Future ‘Crackberrys’ will be rebadged Android phones. On the plus side, by ditching the capital sucking hardware division, they can focus on software, where Blackberry more than doubled revenue last year. A moment of silence please ____________.

Google looks to launch its upcoming Andromeda…Android/Chrome hybrid OS on a Huawei Nexus tablet and a convertible laptop, according to 9to5google.com. The convertible laptop will probably sport the new Pixel brand, as Google appears poised to call the phones they will show October 4th. It will have either an Intel M3 or i5 Core processor, 32 or 128GB of storage and 8GB or 16GB of RAM. There’s also apparently a fingerprint scanner, two USB-C ports, stereo speakers, four microphones, and a 10 hour battery. It’s apparently priced around $800.

Chinese phone maker Xiaomi has showed off its Mi 5s and 5s Plus handsets. According to theverge.com, they have a better camera, faster processor, but of most interest…and ultrasonic fingerprint reader that is under the glass on the front. The portion of the front with the reader doesn’t have screen space under it. Apple has a patent for similar tech, but the iPhone 8 will likely have an all glass screen on the front, edge to edge. On the Xiaomi phones, an indentation in the glass is the only spot that will read prints. Apple’s may not be so restrictive. Ultrasonic fingerprint readers are generally more accurate than the capacitive ones currently used by Apple, Samsung, and the rest.

Apple has also patented laser based positional and 3D mapping hardware…this could give far more reliable mapping for…say…self-driving cars! Appleinsider.com says they were also granted a patent for a hybrid mechanical/ capacitive touch sensitive keyboard. They also have an optical connector that converts signals to light which connects accessories to a laptop through micro-perfs that are invisible to the naked eye. It uses infrared laser light, which draws less power than Bluetooth and Wi-Fi. 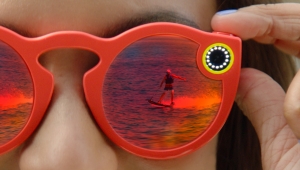 Over the weekend, reports came out that Snapchat was re-branding as Snap, and rolling out connected, camera-equipped sunglasses. Theverge.com reports that they will sell for $130, have a 115 degree lens, which closely follows a person’s field of vision, record circular video, and record at the press of a button. Snap is doing a slow rollout, so don’t expect to see them in the next few days or weeks.

Samsung has already shipped 500,000 Galaxy Note 7’s to the US, and about half the phablets with explodable batteries have been replaced. Now, 9to5google.com reports that some users are having problems with batteries that drain very quickly and are having trouble recharging them. Samsung is looking into it, but says it’s unrelated to the batteries. They just can’t buy a break with the 7…and may end up rolling out the Note 8 a month or so early.

Apple is working on sleep tracking and more advanced heart rate apps for Apple Watch. According to 9to5mac.com, the new heart rate app will be more advanced—measuring a person’s fitness by observing the amount of time it takes for a heartbeat to fall from a peak to resting rate. Cupertino apparently is also looking at other ways to expand HealthKit, making it more of a ‘tool that improves diagnoses’ from doctors. None of that may come for a while, as added medical sensors would not only require new hardware, but probably also approval by the FDA.

Although Amazon smartphones bombed badly, they’ve had pretty good success with the Kindle tablets, and surprising success with the Echo- the voice controlled assistant in a speaker and now in the new Echo Dot. Now, Bloomberg says Apple has been working on something similar powered by Siri for a couple years, and it’s moved into the prototype testing phase. The Apple device may also include a camera and facial recognition that would let it identify household members and their preferences. It would be used less for purchases, and more to control appliances, locks, lights and curtains via voice activation. Considering a couple of recent Apple acquisitions, it may also detect a user’s emotional state. No indication of how soon it might be in users’ hands.

Rumors have been flying for a while now about some company picking up ailing Twitter, which gets tons of eyeballs, but hasn’t been able to convert users to money through ad sales or otherwise. Now, CNBC.com is reporting that both Google and Salesforce- and some media and carriers- Verizon has been mentioned, may be readying formal bids on the 140 character firehose platform.

So you can’t go for the new iPhone 7 or 7 Plus, and you’re still iffy about the Samsung Galaxy Note 7, even with the safe batteries. There are 10 unlocked phones spotted by bgr.com on Amazon with big discounts today and tomorrow. Some examples: For fire sale price, there’s the Alcatel OneTouch Idol 3 for 99 bucks. Another C-note buys you the $400 Nesbit Robin at half off. You can pick up the $650 LG G5 for $479. You get the idea. Go get ‘em, bargain hunters!

On the higher end of the scale, Pax considers itself the Apple of vaporizers. Mashable.com reports that they’ve introduced 2 new app connected weed vaporizers. The Pax 3 heats up in 15 seconds, a full half minute faster than its predecessor, and recharges in and hour instead of 90 minutes. You can swap between flower and ‘waxy concentrates’ in seconds. The app will allow users to customize flavor and vapor volume by setting the precise temperature, as well as customizable LED color themes, interactive games and the ability to lock their device. $274.99 and you get haptic feedback and a choice of colors…10 year warranty, too.

The Pax Era uses pre-loaded cartridges, so it’s handy for when you’re on a hike or on the town. It also connects with the app. The down side? Right now you can only buy Pax Pods in Colorado or with a medical card in California. The Era is $59.99, with the Pods about $40. Everything should be out next month.

My Tweets
clarkreid
Create a free website or blog at WordPress.com.