Thanks to the approval of the secret FISA Court, the NSA has restarted bulk data collection. The secret court invalidated the Second Circuit Court of Appeal decision from May, saying it was illegal. According to engadget.com, the FISA Court said the ‘Second Circuit Court rulings are not binding,’ The secret court ruled that the 180 day period Congress carved out in the USA Freedom Act, which was just signed by the president June 2nd allows for the continuation…at least for another 6 months.

The long awaited ‘buy’ buttons have rolled out on Pinterest. Cnet.com reports that buyable pins are now available on iPhone and iPad apps. Now, shoppers can buy items directly from Pinterest by clicking the blue ‘Buy It’ button, and using Apple Pay or a credit card. They expect to launch soon on Android.

Apple is apparently talking about returning to Samsung for memory in the next iteration of iPhones. 9to5mac.com says they aren’t looking to go over 128 gigs, but will drop the 16 gig model, making 32 gigabytes the entry level memory in the iPhone 6S models. It was already reported that Samsung is supplying the A9 processors. The killer feature that we know of as the phones have entered early production is Force Touch, ported from the Apple Watch.

Microsoft has sold some Bing maps assets to Uber, and along with them, around 100 data collection engineers that worked on Bing. Geekwire.com reports that Uber was already bulking up in the mapping department, having bought mapping software company deCarta in March. Uber has been relying on Google Maps in their app up to now.

Netflix On Track To Be Bigger Than The Combined Broadcast Networks

Netflix is on a roll, and heading towards eclipsing ABC, NBC, CBS, and Fox. Bgr.com reports that in the first 3 months of 2015, they added 4.9 million new subscribers, bringing the total to 62.3 million. According to a research report from FBR Capital Markets, the 10 billion hours of content streamed over Netflix right now would be like having a Nielsen 24 hour rating of 2.6…that puts Netflix on the level with ABC and NBC right now. If their growth rate continues, by next year, Netflix will pass up all the broadcast networks combined!

Apple has updated the terms of its AppleCare+ Protection Plan for iPhone, iPad, iPod and Apple Watch to cover batteries that retain less than 80% of their original capacity within the extended warranty period. Macrumors.com says before now it only covered batteries that held less than 50% of their original capacity. The change applies to AppleCare+ purchased for iPhone, iPad, iPod and all Apple Watch models on April 9th, 2015 or later.

Hydrogen has been touted for years as a replacement for fossil fuels. It’s been no secret that the most common element in the universe is all around, as it helps make up water. For years, it’s been extracted from water by electrolysis. Now, geek.com says scientists at Stanford have come up with a cheaper, more efficient electrolysis process that can run 24/7. Instead of an anode and cathode and a pH barrier, the new process uses two nickel-iron oxide catalysts that can be right next to each other. The system is 82% efficient, much higher than traditional water electrolysis. If that holds up when they scale it up to mass production size, it may revolutionize making hydrogen at volumes useable by vehicles and heating and cooling plants.

It’s often fun to see what words get added to the venerable Oxford English Dictionary. Arstechnica.com reports that…amongst the 500 new words and phrases added to the latest quarterly update, you can now check the meaning of sexting, photobombing, vaping, crowdfunding, and gems like meh and twerk. Fans of actual good singing will be annoyed to find autotune in the OED now, and netbook now has an entry as well.

After being dropped for Android tablets in January, theverge.com says Microsoft has released Office for Android smartphones. It’s just about identical to the iOS version…not as robust as the tablet app, but great for quick drafts and edits on your smartphone. It has full Dropbox and OneDrive support for file storage.

Last fall, we covered a Kickstarter for the Roost Smart Battery. Thenextweb.com reports they’ve gone live to the public for preorders. The Roost battery turns your existing smoke alarm into a smart connected one. A 9 volt battery pack is $34.99, and a twin pack is $64.99. You can order through Amazon or GetRoost. They ship in September. The Roost batteries connect over WiFi to your home network, and they have Android and iOS apps for monitoring when you’re away.

Phone repair service iCracked is looking to expand. Techcrunch.com says they have launched iCracked Advantage, a kind of warranty program for the 40 million people they claim will break phones this year. For 7 bucks a month, you get their same-day, on-demand repair service by a local iTech. Each time you break your phone, it’s a flat $25…including cracked screens, water damage, bad batteries, and home button replacement. A family plan covers 5 devices for $25 a month. According to iCracked’s CEO, 70% of phone owners have no insurance. They plan to have a trade in service up and running by early next year, too. iCracked is in 13 countries right now.

From the more than a little bit creepy department, Facebook has an experimental algorithm they’re working with in their artificial intelligence lab that can recognize people even when it can’t see their faces. According to New Scientist, it picks up other cues like hair cut and style, clothes, face shape, body shape, and more to identify people with 83% accuracy.

They have several patents relating to this, but macrumors.com picked up a report from DigiTimes out of Taiwan indicating that Apple is working on an in-house single-chip solution to integrate touchscreen and display drivers onto one chip. It would also include fingerprint sensors, which would allow Apple to lose the home button, and build phones and tablets with edge to edge screens. They could either make smaller devices with the same sized screens as now, or make them bigger… and of course make them thinner than ever! Synaptics has a chip that has most of this functionality out now, but it looks like Apple is going to roll their own solution.

It’s not a whole new box, but Sony will roll out an upgraded PlayStation 4 next month with a 1 TB drive…double the storage of the previous edition. Theverge.com says the Ultimate Player Edition will also be 10% lighter and suck up 8% less power that the present model. They have not announced pricing yet, advising to check with retailers. Besides the PS 4 announcement, Sony also made changes to the app…available now on Android and iOS. 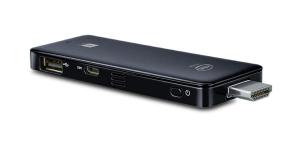 The California DMV has released brief details about 6 accidents involving self-driving cars. 9to5google.com says 5 of the 6 were Google’s, and one was from Delphi. In 100% of those crashes, the OTHER driver was at fault…not the self-driving car! No injuries occurred in any of them. This lends creedance to the thought that once all vehicles are self-driving, accident rates will plummet.

Microsoft has unveiled a $140 PC on a stick. The USB drive-sized PC runs Windows 8.1, and has an Intel Atom quad core processor with 2 gigs of ram and 32 gigs of storage. It can connect to TVs and monitors via HDMI, has a mini-usb port, and has Bluetooth. The PC on a stick is made by iBall, and goes on sale in India next month. No word on upgradability to Windows 10, or when it might be released in the US.

What May Be Coming in Apple Watch 2

With a second generation refresh of the Apple Watch expected out next year, 9to5mac.com says multiple sources are touting some features we will probably see on v. 2.0. Among those are a Face Time video camera built into the top bezel, and a new WiFi system for more iPhone independence. Insiders say you may be able to do most basic communication over WiFi without going through your iPhone. One thing not expected is more battery life. Apparently, Apple says most customers are happy with what the device now has. Did we mention they plan additional pricey premium models starting at over $1000?

On the subject of batteries, some researchers at Stanford have come up with a way to make lithium-ion batteries safer. As has been known, they can overheat and catch fire sometimes. Engadget.com reports the researchers have developed a chemical layer over the lithium anodes that prevents the finger like dendrites from growing out and shorting the battery. The barrier utilizes a mixture lithium nitrate and lithium polysulfide, for you chemistry nerds. A nice side effect is longer life. The treated batteries hold 99% efficiency for over 300 charges, compared with 150 cycles without. The breakthrough could lead to electric vehicles that could go days without a recharge.

Samsung May Be Going Extra Thin in Addition to Extra Large

We had just reported on the Samsung Galaxy S6 Edge Plus, an upcoming smartphone/phablet with a whopping 5.7 inch screen, and now it appears that the phone giant is prepping a model that’s much thinner than an iPhone 6. According to bgr.com, the Galaxy A8 is a full millimeter thinner than the iPhone 6 at just 5.9 millimeters. This svelte thinness is in spite of the phone having a 5.7 inch display like the anticipated S6 Edge Plus! No release schedule for this skinny whopper, and sources say it might even be exclusively for the Asian market.

Amazon is looking at crowd sourcing for deliveries. Forbes.com reports that their On My Way program may use individuals to deliver packages, something like an Uber or Lyft for package delivery. Amazon’s shipping costs grew 31% last year, and this would be a way for them to keep a lid on delivery costs. If they do roll the service out, it may be limited to smaller, more inexpensive items…and not larger or more expensive ones that require insuring. Smart & Final has partnered with Instacart to make local deliveries for a while, and last month Costco and Kroger joined them in doing so.