In what may be a precursor to driverless service, Google is going to open up a ride share pilot program through the Waze app this fall. They had already tested a smaller version near Google headquarters that allowed people to grab a ride with another Waze user. Appleinsider.com says this may not just be aimed at Uber and Lyft, but to get a head start on Apple in the driverless car arena. The service will roll out in San Francisco.

Google is also dropping the Nexus brand for its smartphones. Theverge.com reports that they’ll still be made by HTC, but will be branded with a ‘G’ logo. For the first time, they won’t run a ‘pure’ version of Android. The next version of Google phones will be slightly smaller, with 5 inch and 5.5 inch screen models offered. This will be the first use of the Google brand on hardware for the company.

Ford has patented an interesting method to safeguard your car. With key fobs being relatively easy to hack, Ford has developed a way to set a security code with a series of presses. Cnet.com notes that the interesting part is it’s not all buttons, which makes it much tougher to hack. It will use the radio buttons, both on the dash and steering wheel, and the brake pedal. The car won’t start without the correct sequence. It could be used with keyless and keyed entry systems, or maybe without any key fob at all. No word from Ford on when…or if…the feature might be available.

It didn’t take long….barely half a week has passed since Facebook canned 18 editorial contractors and went algorithm only for its Trending Topics. There have been some obvious goofs, like wrong videos linked to stories, but yesterday a completely made-up story made it and stayed for hours. Theverge.com says the fake story about Fox commentator Megan Kelly’s secret affinity for Hillary Clinton sat in the trending topics for hours…proving that algorithms and engineers make lousy news editors! The story, by the way, came from libertarian source End the Fed.

We’ve reported that the iPhone 8 may switch to OLED screens. Now, according to thenextweb.com, Apple may already be looking at a better tech in the next couple years. It’s micro LED. Cupertino bought LuxVue two years ago, and a secret Taiwan facility is working on the tech…which supposedly combines the best advantages of LED screens with OLED ones. It would also be another way for them to cut a further tie with Samsung, which makes OLED screens.

Just how big a gorilla is Amazon online? More than 800 pounds! Businessinsider.com reports that Amazon sold 6 times more online than the next 8 biggest retailers COMBINED! That’s 59 billion worth of stuff in the 2nd quarter of the year, while Walmart, Target, Best Buy and the rest totaled $10 billion together. The Department of Commerce calculates Amazon generated around 30% of US retail sales growth by itself! 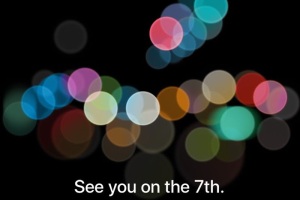 A key rumor about the Apple Watch 2. Macrumors.com has picked up a report out of China from Weibo that the 42mm Watch will have a 35% bigger battery. Prior rumors had a faster processor, GPS, barometer, superior waterproofing…but apparently NO cellular. It may launch with the iPhone in a bit over a week.

Speaking of the iPhone 7, invites to the media should be going out this week for a showing next week, if the rumors are right. Bgr.com has spotted Tweets with a new blue color, and it’s a cool light grayish blue, not the very dark color mentioned earlier. If so, it could be hotter than the Rose Gold was when Apple introduced it. [Update: The invitations are out, and the iPhone 7 rollout date is officially September 7th. The event will be at Bill Graham Civic Auditorium in San Francisco.]

No ‘wow’ features in Fitbit’s Charge 2, but some nice adds to a lot of peoples’ constant companion. Techcrunch.com says they have added removable bands. A standard fitness one is $30, while a premium leather band sets you back $70. The Charge 2 is a bit more streamlined than the previous model. As for tracking, it can tell if you’re walking or using an elliptical, and Fitbit has added Guided Breathing. It has two and 5 minute sessions, allowing the device to be used as a meditation wearable. It’s $150.

Apple Will Ditch iPhone Home Button in 2017; VW To Make a 2019 Electric Model that Will Charge in 15 Minutes

All the rumors have said Apple plans a radical redesign to the 2017 iPhone. Earlier this year, there were stories about this year’s model losing the home button. That didn’t happen, but according to macrumors.com, the redesigned 2017 phone….which we’ll call iPhone 8…will finally lose the venerable home button, to make way for a flexible edge to edge, curved OLED screen.

Volkswagen is working on a 2019 electric car that will go 300 miles after a 15 minute charge. According to techcrunch.com, they will preview an electric Golf sized model at the Paris motor show this year. It is expected to roll out in late 2018 or early 2019 as a 2019 model. 300 miles on just a 15 minute charge could be a real game changer for electric cars if it’s priced for mass appeal.

Apple is working on a social networking app along the lines of Snapchat and Facebook. Macrumors.com says Cupertino’s goal is for you to be able to shoot, edit, upload, and share a video in less than a minute…all with one hand! If the stars align in Silicon Valley, Apple will roll out the app in 2017.

Appleinsider.com has uncovered a patent that would allow future iPhones to snag the fingerprints and pictures of thieves. The unauthorized user’s info might be stored locally, or sent to a remote server for more evaluation. It’s not clear that such collection would be legal everywhere, even involving crooks, so it remains to be seen if this will actually be introduced on the handsets.

We reported on Uber’s imminent release of self-driving cabs in Pittsburg to test out their systems. Now, according to thenextweb.com, they’ll be #2 at it. Apparently, a firm called Nutonomy is putting the rubber on the road in Singapore today. As with the Uber test, rides will be free, and there will be a company engineer along to observe the system, and grab the controls if needed. Nutonomy was founded by a couple of robotics and intelligent vehicle tech geniuses from MIT.

A big announcement yesterday from Delphi and sensor-maker Mobileye. They plan to partner to build a fully autonomous car system that auto manufacturers can use to make their cars self-driving. The system will be production-ready for car makers by 2019, according to arstechinca.com, and could show up in new cars between late 2019 and 2021. Mobileye recently split the sheets with Tesla, but will apparently continue to work with BMW and Intel on BMW self-driving platforms.

Speaking of Tesla, businessinsider.com reports that they have announced an upgrade to the Model S and Model X. A beefed up battery pack will extend mileage from 289 to 315 miles on a charge, and Ludicrous mode will get the Model S P100D from zero to 60 in 2.5 seconds, making it the world’s fastest production car. The upgrade is $20 grand, or an additional $10 grand if you already ordered a P90D Ludicrous but haven’t taken delivery yet.

Pictures of the Playstation PS4 Slim and a new controller have already leaked out prior to Sony’s rollout September 7th. Now, bgr.com says a Sony blog post mentions “PS Now on PC Announce Post”. This may have accidentally spilled the beans on release of their Playstation Now cloud gaming service on PCs. No word on pricing, but it had better be more reasonable if Sony expects it to catch on.

In a report out of Japan picked up by macrumors.com, Apple is planning a third iPhone model next year with a 5.5 inch OLED screen that will sport curved edges. Earlier rumors had Apple adapting OLED screens in 2018, but now it appears one model of the iPhone 8, or 10th Anniversary iPhone, or whatever they plan to call it will have it, while the 4.7 inch and other 5.5. inch models will have the same LCD screens as the present models. OLED screens have blacker blacks, and the colors on screen ‘pop’ more. Samsung has been using them on their Galaxy series. Of course, the Galaxy S7 Edge also already has the curved screen Samsung has made for a couple years now.

Last month, Android users got Twitter’s Night Mode, and yesterday it rolled out on iOS, according to cnet.com. I like it. It darkens all the white space and pictures, and the Tweets show up as white text on a black background. It even works on my old iPad that doesn’t support Apple’s Night Mode. Find the little settings cog icon, and it’s one of the selections.

In a move certain to infuriate everyone (except advertisers), Facebook is testing out autoplaying video WITH sound! Thenextweb.com says actually, the social giant is testing two versions in Australia. One just autoplays, and another has an unmute button in the lower right corner. The so-called ‘feature’ can apparently be disabled in settings. Hopefully, Facebook will choose the unmute button version if they decide to roll the feature out to everyone.

My Tweets
clarkreid
Blog at WordPress.com.