Amazon Game Studios rolled out the first titles that feature deep integration with Twitch at TwitchCon in San Diego Thursday. Amazon bought Twitch in 2014. Geekwire.com reports that they dropped Breakaway, a sport brawling game, and Stream +, a wagering system. They also tipped New World and Crucible, a couple of other games built for Twitch broadcasters, viewers, and players. 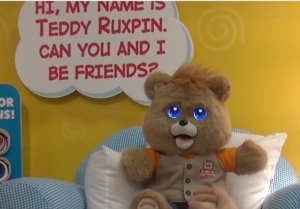 He’s Baaaack! Teddy Ruxpin, which was a huge hit years ago for about 5 minutes…only to fill an entire mall store in San Mateo at fire sale prices later, gets a makeover. TechCrunch.com reports that the v 2.0 has somewhat creepy LCD eyes and iPad connectivity, and comes with 4 gigs of memory for stories he can read to kids. Ted 2.0 was rolled out at the Dallas Toy Show, and should be available in 2017. No word yet on pricing.