They aren’t calling it a car, and it sure doesn’t look like one. GM’s Cruise has revealed their first vehicle, which is named the Origin, but which the company so far calls ‘the property.’ Theverge.com got a preview, and in a number of photos and a brief video, you can take a look. My take is that famous designer of iconic GM cars Harley J. Earl must be spinning in his grave like a pinwheel! The doors slide open, and there are a couple bench seats inside for passengers…which face each other. It appears to seat 6. Video screens are above the seating, which can show various things like the pick up or drop off of passengers. There doesn’t appear to be anything like a trunk to store luggage, so it presumably is for short taxi type runs. Cruise says it’s designed for everything to be replaceable, so it can be used over a number of years. The vehicle is about the size of an SUV. There are no pedals, no steering wheel, no controls at all for a human to take over should something go sideways. The running gear and exterior are done by GM, the interior by Honda, and the self driving portion by the Cruise division. If I were predicting, I would predict that there will be a couple more ‘draft’ designs before this hits the streets!

We’ve been reporting that Apple will drop 4 new iPhones this year, including a cheaper model that many have been calling the ‘SE 2.’ Now, 9to5mac.com has picked up a Bloomberg report that the cheaper model will start production next month, and may be out in March…with the other iPhone models coming in September as usual. It will feature Touch ID and not Face ID, and will have the form factor of the iPhone 8…a 4.7 inch screen with a large ‘chin’ and ‘forehead,’ and a single lens camera on the back. The new model will be bulked up with the processor of the iPhone 11…the A13, and will have more memory. Most are predicting it will start around $399. It’s possible they will call it the iPhone 9, since Apple skipped that number a couple years ago. 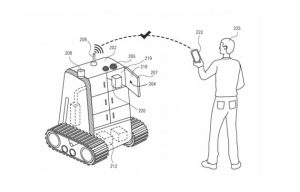 Amazon has patented delivery robots that can trek around neighborhoods, handling that important ‘last 50 feet’ delivery issue that has many logistics companies attention. Geekwire.com reports that the thing has multiple doors like the Amazon lockers, and the correct one will open for a person to pop out their own package, then the little bot will be on its way to the next drop off. It really does have a creepy resemblance to the lethal Daleks…the evil robots that have haunted Doctor Who for the last 50 years. EX-TER-MIN-ATE!

In other scary Amazon news, a story out in the Guardian yesterday alleges that Jeff Bezos got his phone pwned when he used WhatsApp and communicated with Saudi Crown Prince Mohammed bin Salman. Apparently, the hack happened in May 2018, when Bezos got an unsolicited message from the prince…or at least from some person or persons with control of his WhatsApp account. There was a video file that was later analyzed and said to be ‘highly likely’ to carry malware that allowed ‘large amounts of data’ to be secretly copied from the Amazon CEO’s phone. While the Guardian story shines more light on the mechanics of Saudi cyber-operations, Amazon — and Bezos — had long suspected the kingdom’s involvement in a data breach. In March 2019, following the public airing of Bezos’s extramarital affair, Amazon head of security Gavin de Becker wrote in a piece published by the Daily Beast that “our investigators and several experts concluded with high confidence that the Saudis had access to Bezos’ phone, and gained private information.” Careful about accepting files over your chat service!