Facebook has dropped its first hardware product in the Portal line. TechCrunch.com says they are auto-zooming video chat screens ranging in price from $199 to $349. The Portal units will run Alexa and eventually Google Assistant in a countertop video chat screen that zooms to always keep you in frame. The big question will be whether people will want a Facebook cam and microphone in their house, even with a physical clip-on privacy shield. At any rate, the presale starts now. For $199, you get the 10 inch screen Portal, and for $349 you will be the proud owner of a 15.6 inch swiveling screen with a hi-fi audio Portal+. Save $100 if you buy any two Portal devices. The screens come with ‘Hey Portal’ voice navigation, bluetooth and voice activated music, Facebook Messenger for video calls, Spotify and Pandora. More video provers to come. Facebook claims there is built in privacy…no facial recognition but something called 2D pose that runs locally on the device to keep you in picture. They claim the unit only turns on with the wake word, and that it doesn’t save recordings…also they have data encryption. With a tap you can automatically disable the cam and mic, and it does have a plastic privacy shield you can slide over the cam if you still want to chat…without video. They ship in November. You can preorder at Portal.Facebook.com, Amazon, and Best Buy.

Tomorrow, October 9th, Google will be showing their latest at an event scheduled for 11am Eastern, 8 Pacific. Theverge.com reports that the flood of leaks has given us a good idea of what to expect. The Pixel 3 and 3 XL phones top the list…in fact, someone got hold of a working Pixel 3 in Asia a couple days ago from a source…talk about a leak! The phones sport target screens, wireless charging, and a second selfie cam. Also expected is a wireless charging stand for the handsets. There MAY be a Google Home speaker with a smart display to compete with the Amazon Echo Show. An expected item is the Pixel Slate, A Google branded Chrome OS tablet. Rumors have it with a detachable keyboard, and expect it to be fairly high end like the iPad Pro and Surface Pro.There will probably be a Pixelbook update, but probably not a major overhaul there. We’ll have details after the actual event tomorrow.

Look for a beta in 2019 of Microsoft’s game streaming service, Project xCloud. According to engadget.com, the idea behind the cloud system is to allow users to play any video game where they feel the most comfortable or where it’s convenient….on a console, a computer, or mobile device. Of course, Microsoft is most interested in making it as frictionless as possible for users to play their own Xbox One games. Even with the beta out next year, Redmond cautions that this is a complicated project, and may take a while longer to perfect.

Microsoft has pulled the October update to Windows 10 (version 1809) after complaints that it deleted user’s files. ZDnet.com says some users said they couldn’t even recover all files using a recovery product like Recuva. There was a similar issue with the April, 2018 update. In that case, Microsoft delayed the update until the end of the month to squash the bugs.

Google has already let us know the rollout date for the new Pixel Phones, and we’ve had rumors of a fresh Pixelbook, too. Now, thenextweb.com says there may be two new Pixelbooks coming. In a leaked video, one looks much like the one Google put out last year, but the other has a hinge similar to Microsoft’s Surface. So far, there aren’t any other rumors confirming this, but we may just see not only a couple of updated Pixel phones but also a couple new Pixelbooks next month…maybe a freshened Daydream View and additional or updated Google Home smart speakers, too!

Here’s the kind of tech innovation I like to see…Audi is going to make paying tolls simpler with an Integrated Toll Module. According to cnet.com, it’s built into the mirror, and will debut on the upcoming Tron e-SUV. It’s more than just a transponder. You can reconfigure it with the car’s infotainment module…for example, re-setting the vehicle occupancy for HOV lanes, or to use a different toll network if you are traveling out of your area. Audi will show off the e-Tron next week in San Francisco…and by the way, it has already gone into production!

7-11 says they now have Apple Pay and Google Pay available at nearly all their 10,000 US locations. Macrumors.com reports that they also have a 7-11 NOW app for on-demand orders, and a loyalty program. For Apple Pay, you need an iPhone 6 or better, and can use a compatible Apple Watch model if you want. In addition to 7-11, long time holdout CVS Pharmacy will start taking Apple Pay this fall.

**We will have a full recap of the Apple event tomorrow morning after the presentation from the Steve Jobs Theater that starts at 10am. 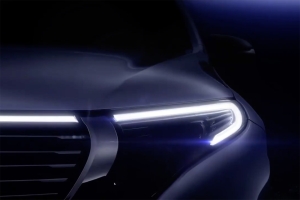 Their company slogan for over 100 years, a personal motto of Gottlieb Daimler, has been ‘The best…or nothing.’ Now, Mercedes is going to reveal their first production electric SUV on September 4th. According to engadget.com, a very brief video clip dropped of the vehicle over the weekend. It does have a grill…unnecessary in an e-vehicle, but perhaps necessary from a branding standpoint…making it clear that it’s unmistakably a Mercedes. Interestingly, except for the tiny script on the crest on the hood, Mercedes-Benz has never put their actual name on a vehicle in the past 70 years…only the iconic 3 pointed star! The e-SUV will roll with a 400HP motor system and 70kWh battery pack. It will boast 0-62mph in under 5 seconds and a 310 mile maximum range. It should hit the roadways in 2019.

The smart speaker market is exploding, but no one knows how much longer it will sustain such growth. Geekwire.com reports that an analysis by Canalys estimates that in the second quarter of this year, the market grew 187% worldwide year over year, with shipments of 16.8 million smart speaker devices. Amazon still commands half the market, Google now has a quarter, and the final quarter is divided up amongst Chinese players and Apple. Canalys sees Google shipping more than Amazon in Q2, 32.3% to 24.5%, but others disagree. Futuresource and Strategy Analytics say Amazon is still on top. The latter gave amazon 41% and Google 27.6% in 2nd quarter, so we’ll have to stay tuned to see who actually comes out on top when the smoke all clear.

Google will roll out the Pixel 3 at an event in New York City on October 9th, according to a couple Bloomberg sources, in a story picked up by 9to5google.com. In addition to the Pixel 3 and Pixel 3 XL, we should also see a 2nd generation Pixelbook, a new set of Pixel Bud earphones, and a Pixel Watch running the Wear OS.

We are pretty certain Apple will roll out its 3 new iPhone models on September 12th, but no one is certain about the name. Macrumors.com says Apple has considered ’S’ since this would ordinarily be an ’S’ year for them…they may have more significant changes next year….BUT is waffling on naming the OLED models that. Maybe that’s due to how it sounds. Although the ‘X’ model was supposed to be TEN, most people called it X. An Xs model could bring snark and ridicule…say it fast…Xs….excess! Well, a lot of people feel that way about Apple’s prices! Anyway, whatever it is should roll out September 12th.

The Pixel 2 was a big improvement on the original Google Pixel phone, and the 3 is eagerly anticipated this Fall. Now, 9to5google.com says leaker Evan Blass, who has a pretty decent track record, is touting the release of and updated Pixelbook alongside the Pixel 3 and 3XL handsets. Bless claims the updated Chrome OS Pixelbook will be shipping by the holidays. The fall event is expected to also show off A Pixel Watch and new generation of Pixel Buds.

Apple is testing a private beta version of OS12 for HomePod that includes multiple Siri timers and allows people to make and answer phone calls…in an effort to keep up with Alexa and Google Home. 9to5mac.com reports that corporate and some retail employees are test driving the beta. The multiple timers feature is one Alexa has that allows, for example, someone to put a couple timers on different things they are cooking at the same time. Right now, it’s unclear which, if any, of these features will make it to the final release of OS12 for HomePod this fall.

Qualcomm has showed off the first completely integrated 5G module for smartphones…including 5G mmWave antenna, wave radio, power amp, and antenna array. According to macrumors.com, the whole system has been crammed into a package small enough to sit on your fingertip. It is thin enough to fit the bezel of a phone, and Qualcomm sees up to 4 being put into a handset so if one antenna is covered by a hand or otherwise blocked, the unit will still transmit and receive. The tiny 5G modules are being shipped to phone makers this week.

Tesla has reportedly ask for cash back from suppliers, in order to cut their costs and become profitable in Q4. While it’s not unusual for a company to ask for or demand price cuts from suppliers….Walmart is a past master at this…it IS unusual to ask for money back from previously furnished and paid for items. That’s what electrek.co says Tesla has done. Some of the clawbacks would date back to 2016. It remains to be seen if any suppliers will cooperate, now that Tesla is producing the promised 5,000 Model 3s per week.

Google Rolls out Pixels and Adds to the Line; Sonos Bows New Speaker

The highly anticipated Pixel 2 and Pixel 2 XL today. The XL has a whopping 6 inch OLED screen, all aluminum body, and better image stabilization…although still a single lens cam. Cnet.com reports that it supports AR Core, the Google AR programming interface. The HTC made phone has the squeezable sides to activate Google Assistant, and has always on display for notifications. The handsets are on pre-order now, and start at $649 for the 2 and $849 for the 2XL…they should be on the streets in a couple weeks.

Google Pixel Buds were also rolled out…the earbuds are joined by a neck cord and have a charging case that gives you up to 24 hours use. They work with Google Assistant on Pixel phones, are available in black, white, and blue, and preorders have started. They run $159, and are available next month.

Also bowing today where Google Home Mini and Home Max. The Mini is a smaller version of the Home Assistant speaker, while the Max is geared more towards the audiophile. The max goes on preorder in November, and will be available in December for $399.The Mini can be preordered now, and is $49…should be out in a couple weeks.

The Google PixelBook was also rolled out…a replacement for the Chromebook Pixel of 2 years ago. It’s still Chrome OS, but has Android app support, and quick charges for up to 10 hours battery life. It has instant tethering to Pixel phones, and Google Assistant is baked in. The PixelBooks start a $999, can be preordered now, and will be out the end of the month.

Google also showed an updated Daydream View. It’s $99, and available October 19th. A surprise reveal is Google Clips…a standalone cam that captures short clips. It auto-selects and learns who you want in shots and which shots, and builds clips from them…then uploads on demand. No release date, but it will be $249.

Sonos has rolled out the new One wireless speaker. According to 9to5mac.com, it has Alexa voice control, and will support AirPlay 2 by the first of the year. It doesn’t actually have Siri, but with the Airplay function, can be controlled by any Siri enabled device like iPhones and iPads. It’s $199, and will be out October 24th…preorders are open now.