It was bound to happen, and of course Amazon is involved. Theverge.com reports that Amazon is working on a robot for homes…code named ‘Vesta.’ The development is happening in Lab126, the Amazon ‘Skunk Works’ that cranked out the Kindle, Fire Phone, and Echo. Apparently, the device is something of a ‘mobile Alexa,’ that would follow you around the house, awaiting your commands. It could be out for the public…at least in beta…by next year!

There’s been talk for months about Apple bringing out 3 phones this fall….successors to the iPhone X and X Plus with OLED screens (and a budget-busting price), and a less expensive 6.1 inch LED screen phone. According to businessinsider.com, KGI Securities…probably the most reliable leaker about things Apple on the planet…says it could be priced starting at $550! But wait….there’s more! This more reasonably priced iPhone could also have a $650 version with TWO sim cards for 2 different numbers! This is not only a plus for travelers or for having both a home and business number, but it’s a really big deal inAsia, where people like to be able to easily switch between carriers and data plans. If these rumors pan out, KGI says the phone could account for 65-75% of iPhone sales next year.

The death of the recorded music business has apparently been ‘highly exaggerated!’ After dropping for the last 10 years, the music biz is being buoyed by…of all things…streaming music. 9to5mac.com says streaming music now makes up some 43% of total revenues, but it grew a full 39% last year! On top of that, the combined revenue of indie artists was nearly as big as that for Universal Music, the biggest label. Apple Music now boasts 40 million subscribers, and some analysts think it may grow another 40% a year for the next 3 years!

Facebook has been getting pounded for the Cambridge Analytica scandal involving the data of millions. Meanwhile…amazingly under the radar….Google rolls merrily along, Hoovering up even more of your data! Bgr.com is reporting that Google is able to track you even better than Facebook can, and has vast information on people…especially people who use Google services like gmail. A report finds that Google collects enough data on some users to fill a stack of pages 8 feet high every two weeks! The European Union is cracking down on such data grabs, and Google is working to change their policies to comply…but be aware that even if you don’t use their services and opt out of ad targeting, Google still has plenty of info on you! They know what you want and where you go, and even what you read. Again…even if you don’t use anything but the web, and no services but Google search, they have piles of info about you! 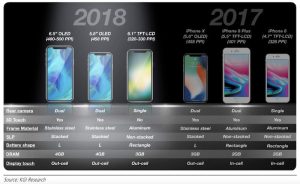 Frequently reliable Apple analyst KGO Securities estimates that Apple could ship 100 million of the new 6.1 inch screen LCD iPhone. Macrumors.com says KGI has already predicted that Apple will drop the iPhone 8 and 8 Plus in favor of this new, lower priced iPhone. It won’t have the OLED screen, but will be full screen with ‘the notch.’ It also will have an aluminum frame instead of stainless steel, a single lens camera, and no 3D Touch. On the other hand, KGI says it could be priced starting at $699, which will pull in a lot more buyers than the $1000 or $1000 top iPhones for 2018. KGI thinks the lower priced model will account for half of all new iPhones after the new models roll out this fall.

Mining cryptocurrency with ‘unused computer power’ is great…IF you’re doing the mining on your own machines. According to 9to5google.com, MalwareBytes says a substantial number of Android handsets have been hijacked to mine the cryptocurrency Moreno. All the websites that do this use a redirect, so if you get one of those while browsing, you should run tools on your phone (like those from MalwareBytes, of course.)

Magic Leap has been trying to stay under the radar until recently, when they showed a model of what their AR glasses will look like. Now, theverge.com reports that they will produce several versions, including one priced like a ‘higher end mobile phone to higher-end tablet.’ They also plan a high end version for pros and developers, but may end up with as many as 3 models in the beginning. Although dropping around $1000 for a set of AR glasses doesn’t sound cheap, Magic Leap points out that over time, the headsets can replace your phones, televisions, laptops, and tablets….which could save thousands of dollars.