Amazon has been making bags of money since the start of the pandemic, as Jeff Bezos’ huge jump in worth has shown. Techcrunch.com reports that Amazon is going to be hiring about 3500 jobs to 6 US cities. Most of the gigs will be ‘corporate and tech’, according to the company’s descriptions. They span AWS, Alexa, Amazon Advertising, Amazon Fashion, OpsTech, and Amazon Fresh. They will be located in Dallas, Denver, Detroit, NYC, Phoenix, and San Diego. 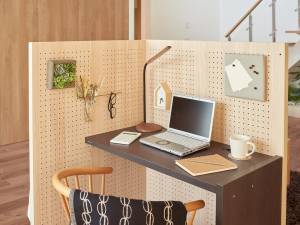 You know that working from home, so many people badly miss their beloved cube at the office (dripping sarcasm.) Now, according to business insider.com, Panasonic has the answer…you can buy your very own tiny cube for $835 that can be customized and fit in a living room or spare bedroom. The walls are pegboard, so you can hang all sorts of personal crap the office might not let you..or just some decorative things to brighten the workspace up. The desk, called Komoru, will be out in September, starting in Japan.

In yet another creepy ‘you have no privacy’ story, the Secret Service has been buying location data on the open market that would otherwise need a warrant. Arstechnica.com says The Secret Service back i 2017-18 paid $2 million to a business called Babel Street to use its service Locate X. Locate X provide location data harvested and collated from a large variety of other apps. ICE and Customs and Border Protection have also bought access to cellphone location activity for investigations. Needless to say, this is distressing. Senator Ron Wyden has said he is drafting legislation to close this loophole around peoples’ Fourth Amendment rights. Hopefully, in the next year he will get it introduced and passed.

Microsoft has been talking to them, Twitter has been rumored to have looked at it, and now Oracle is in the hunt for the US assets of TikTok. Engadget picked up a report from Financial Times saying that Oracle is working with investors that already have a stake in TikTok owner ByteDance. FT says that Twitter may not have the financial wherewithal to do the deal, and Microsoft wants to buy in countries besides the US that ByteDance doesn’t want to sell, so Oracle may be a player. The question I asked immediately was how the heck does a video app used by teens fit into Oracle’s business to business portfolio of services..and apparently, that has crossed the minds of a number of others. If Larry Ellison wants to buy it, though, he can. Oracle is worth about $166 billion, with $43 billion in cash or equivalents.