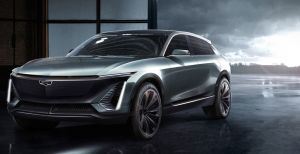 Cadillac has dropped a pic of its first EV platform. The GM division didn’t give a name or details, but the Caddy EV will be the first to use the so-called ‘BEV3’ platform that will eventually be used across the GM lines for EVs. Interestingly, Cadillac president Steve Carlisle (as quoted by engadget.com) said “The architectural design will allow the battery packs to fit into the vehicle like ice cubes in an ice cube tray, you can put in as much water as you want to make as many cubes as you need — the tray still takes up the same space in the freezer.” A modular battery pack enables different range vehicles to be built on the same line…and may allow for upgrades at dealerships. No word on when the Caddy EV will be out, but they did announce they will be rolling out new models at the rate of one every 6 months through 2021.

Ford is adding a hybrid Explorer to their SUV line, coming in 2020. According to techcrunch.com, it’s loaded with tech, and importantly to people that buy SUVs…won’t lose space in the back to haul stuff thanks to stashing the battery pack under the 2nd row seats. The hybrid will have 318 combined horsepower and a range of 500 miles. It will have a 10 speed hybrid modular transmission and liquid cooled lithium-ion battery.

In the aftermath of Apple cutting iPhone production, now Credit Suisse predicts overall smartphone production will drop 19% this quarter. 9to5mac.com reports that such a drop will make it the lowest level of production since 2013. The bank warned that they don’t see a bottom in sight. As with Apple, the softening China market is a big part of the culprit. On the plus side, refreshed iPhones should sell better in China and everywhere this Fall…especially with the rumors that Apple will add a third rear camera to the top line phone, and a 2nd cam to the iPhone XR replacement. Of course, there are already some phones out that have FIVE rear cameras.

Twitter is going to launch a new beta in the next few weeks, using a standalone app for a select group of users. Techcrunch.com says it will focus on a new design for the way conversations are Threaded. One big experiment in the beta will be color coded replies….one color for people you follow, another for others, and a third for your replies through the thread. Beta testers will also be able to mark replies that branch off so they can come back to those later and follow threads or sub-threads that have information of interest to them. Interestingly, the heart for liking and arrows for re-Tweeting don’t show up until you click on a Tweet…to give a cleaner flow as you scroll through the timeline.