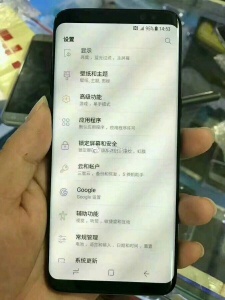 The Samsung Galaxy S8 will be unveiled in just a week, and the leaks continue. BGR.com has one that is particularly interesting in that it shows a picture of the screen in use, giving an idea of just how much of the front is screen…they have pretty well made good on covering most of the front panel! Presumably, this is an indicator of what Apple’s iPhone 8 will do with front screen real estate…it’s pretty spectacular! The S8 will be released April 21st or 28th, and judging from the pix, it should be a huge hit!

While some people are delighted to have Amazon’s Alexa at their beck and call, and less are delighted with Apple’s Siri, Mariott is testing both out to decide which might be best for letting guests control their rooms via voice commands. Appleinsider.com says a Bloomberg report points to Mariott choosing one by mid year. Alexa has the advantage in both price and ease of use and add ons, but only works with English and German. Siri supports 21 languages. I can’t wait to hear people yelling at the door lock trying to get their room to open in the middle of the night. Have fun, travelers!